Environmental impacts are a key focus of Imvutshane Dam project 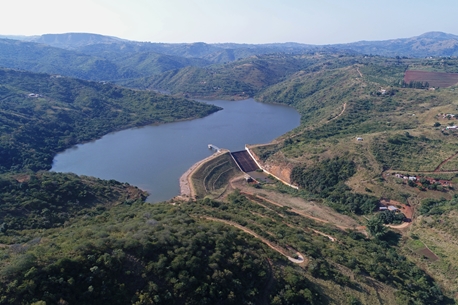 The environmental consequences of large dams are numerous and varied, and include direct and indirect impacts to the biological, chemical and physical properties of rivers and riparian (or “stream-side”) environments. The movement patterns of aquatic organisms are fragmented. A dam also traps sediments that are critical for maintaining physical processes and habitats downstream of it. Another significant and obvious impact is the transformation of the dam basin, as water displaces terrestrial ecosystems and transforms them into aquatic habitats.

The indirect impacts that are often not considered extend to the potential social and heritage impacts. For example, the location of a dam can cut communities off from one another or displace people located too close to the dam’s flood lines. Community gardens, sport fields and graves can also be impacted, due to their location in relation to the proposed dam.

During the construction of the Imvutshane Dam in rural Maphumulo, KwaZulu-Natal (30 km north-west of KwaDukuza) all environmental impacts had to be overcome. The design made provision for a controllable bottom release valve designed to accommodate the free movement of eels in and out of the system. The construction of a rough concrete surface on the dam spillway ensured the hydrological signatures were maintained as far as practicable.

Stefanutti Stocks’ project team relocated the indigenous vegetation and moved the graves located in the dam basin. A new sports field and a community garden were also built, and the families that were negatively impacted by the dam received new houses that were constructed closer to their families and friends.

The construction of the 3.1-million-m³ Imvutshane Dam has transformed the area from a relatively low biodiverse area into a flourishing aquatic ecosystem.

The dam’s first spill was celebrated on 22 May 2017. It is well-known fact that fish are a good indicator of the health of a dam, and during the event numerous fish were seen thriving in the waters! The dam will also create a dependable source of safe drinking water and go a long way to ending water scarcity during winter seasons and droughts in the region.